Iron Fort or Lohagad is 2000 years or so old fort replete with history. This fort has been famous in the recent history as a place where the riches that were captured by Chatrapati SHivaji, the legendry Marathi King, from Surat, a major trading port of Mugals in that era, were stored. When I was looking around to trek to Lohagad, two distinct options emerged.

The first option was to travel to Lonavala by Train, followed by to Malavali (station next to Lonavala on Lonavala – Pune route) by a local train and then trek by road via Bhaja caves (a small detour to visit these famous Buddhist Caves) through a route that can take us to either Lohagad or VIsapur. Take the right fork at the junction and that takes us to Lohagad village. The climb to fort starts from here.

The other option that emerged is to travel by road from Mumbai (or Lonaval) to Lohagad village and then start the climb. This drive will take the travelers twice under the Mumbai – Pune Super expressway. At Ambawane village junction, one has to take left bound arm of the fork, in fact at most junctions it would be leftward road that one has to take.

After this research, we concluded that we will travel by road via Lonavala to Lohagad. That also meant that we would miss Bhaja Caves.

Having firmed up the plan and decided to do this trip on 7th July with night stay at Lonavala we did the packing (considering that it is rainy season, extra change of dress, shoes, etc was required) and got ready to move next day.

On 07th Jul, we started at 0730 and stopped over at first food court to have some tea etc. We left that place in about half an hour and reached Lonavala town by about 1100 hrs. Going through Lonavala town on the other side of railway track was a difficult task due to heavy traffic (Lonavala on weekends is very crowded). After crossing the town the ride was smooth till we reached the fork of Dhudhiwane and Lohagad.

The initial climb on the narrow, nearly single lane road in itself gave me a serious doubt about my Indigo diesel with four people inside able to climb these gradients. The road was narrow, shoulders of the road pathetic and lots of loose gravel coupled with the steep gradients steep were the reasons for the doubt. Hats off to Indigo’s super power, the vehicle took the climbs in its stride and we could drive to Lohagadwadi, the village at the base of the fort.

There, after paying the parking fee of Rs 20, we parked the car and started the climb. This is the village where motorable road from Lonavala and the route from Malavali which is mostly taken by the trekkers merge.

Initially climb was on dirt track and it was steep at few places. There were lots of monkeys in the beginning of the trek and during the climb to give climbers company. There was a small board at the foot of the trek giving the history and a rough map of the fort which was informative and useful. 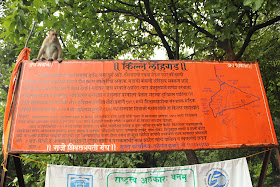 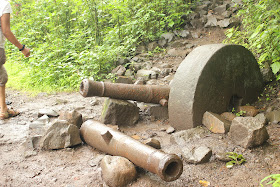 After some time the dirt track converted into staircase made using original rocks cut into rough steps of varied size. The height variance can be sometimes difficult for some people. As we gained the height, the natural beauty of the surrounding including the backwaters of Pawana Dam became evident. It was a mystical day with intermittent rains and clouds descending on the trekkers. This hide and seek with the clouds was the bonus to us travelers.

After some time these rough staircases gave way to more regular ones which had standard height and were more systematically constructed. They were therefore easy to climb. As the staircases start, the first door, traditionally called Ganesh Darwaja arrived. As expected for any fort, this door no 1 on the way to top also had huge steel nails mounted on it to deter the elephants of enemy forces from breaking open this door by brute force of impact of their head. 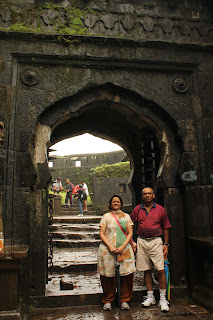 Further climb to the fort continued. There were few caves enroute which were supposed to be grain stores and Nachani ( a hill grain) stores like the one in the photo below:- 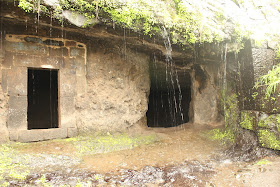 Just short of second gate, there was this bastion for which steps lead from the left of this gate through a small arched gate. The Archeological Survey guard on the fort told me that that there is a set of toilets at the end of this bastion but there are no guiding boards. The boards are essentially required. 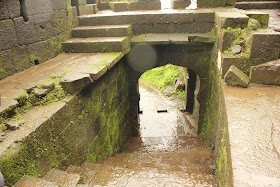 View of the bastion. And second gate. 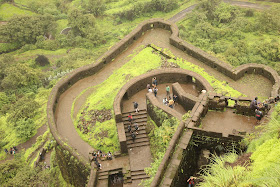 The climb through remaining gates is not complicated but the degree of difficulty increases in the final two flights of stair which have become uneven and can have running water coming down over them and certain places may also have moss.

The final door called Mahadwar leads to a courtyard having walls on three sides and a door leading to the areas of the fort, which must have had some specific use. There is no roof on this courtyard. 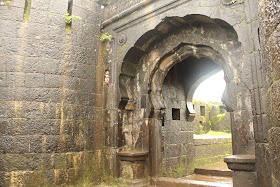 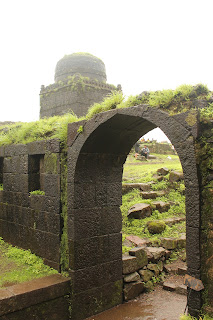 There are some balconies around this courtyard approached from flat ground of the fort. The photo below shows a view from one such balcony. Mazar inside is also in the view. 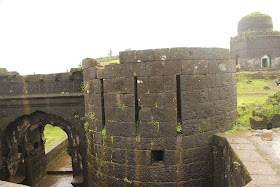 Once inside, there is vast expanse of land most of it flat and some of it high ground. We roamed around in the fort and saw Shivaji / Shivji and Hanuman Mandir, Shatkoni talav (Trimbak Talav), 16 koni Talav (hatti talav), Dargah, a domed structure which is the first thing that is seen as the fort is reached. 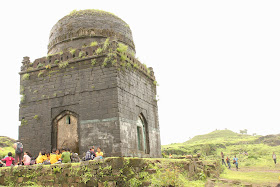 We saw two more mazars, Vinchu Kata ( a outcrop of a about 1500 yard spur, which is part of the fort and has fortification) called so because it looks like a sting of scorpion and Laxmi Kothi, a cave in the fort. 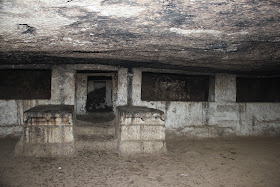 Another interesting phenomenon which can be witnessed only during monsoon is a reverse shower, a effect of strong wind flowing from the valley to the fort on the down stream falling down as water fall. This strong wind pushes up the gushing water in a strong spray which is used by everyone to have a nice rain dance. See it below. 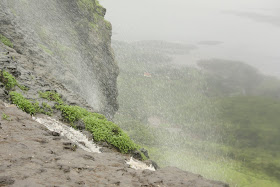 After a ‘Dekho’ around in the fort, we started our downward descent. After a trek of about one hour in the midst of rain and clouds we came down to Lohagadwadi. Had a good fill of Bhaji (Pakode), Vada Pav, Jhunka Bhakar and Fresh corn at Lohagadwadi and completed our trip. In took a total of 3 hrs and 30 min to complete the trip.

It could have taken lesser time to climb up and come down and also actually the fort has many things to see and we did not try to see every thing. I would recommend that at least three hours be kept to wander around in the fort itself. For an informed trip, it is recommended to read through this article on the net, which I could find post this trip while reading about the fort to write the travelogue. The reference is  ‘http://fortsinmaharashtras.blogspot.in/2009/05/lohogad-and-visapur.html’

My recommendation is to read this article before embarking on a trip of Lohagad. Other points of interests were:-

(a) The signage on the road from Lonavala for Lohagad is non existence. The leftist alignment at all most all junctions is true but one needs to ask as there is no signage.

(b) There are no proper toilets on the fort. The archeological survey of India guard told me that there are toilets during the climb at two places but again no signage about these toilets which are essentially required.

(c) Also, no source of drinking water that I could see but I am told one of the pond has drinkable water.

(d) In monsoon, wind cheaters are a better option but umbrellas may serve some purpose.

(e) Some eatables should to be carried but the wrappers must be carried back to ensure no littering.

(f) Eating in the shops at Lohagadwadi post trek is a great fun in itself, don’t miss that fun, Any hotel at that place is good for this purpose. Don’t look for superior hygiene etc just enjoy the food.
Cmde Harshad Datar at 10:41 AM
Share